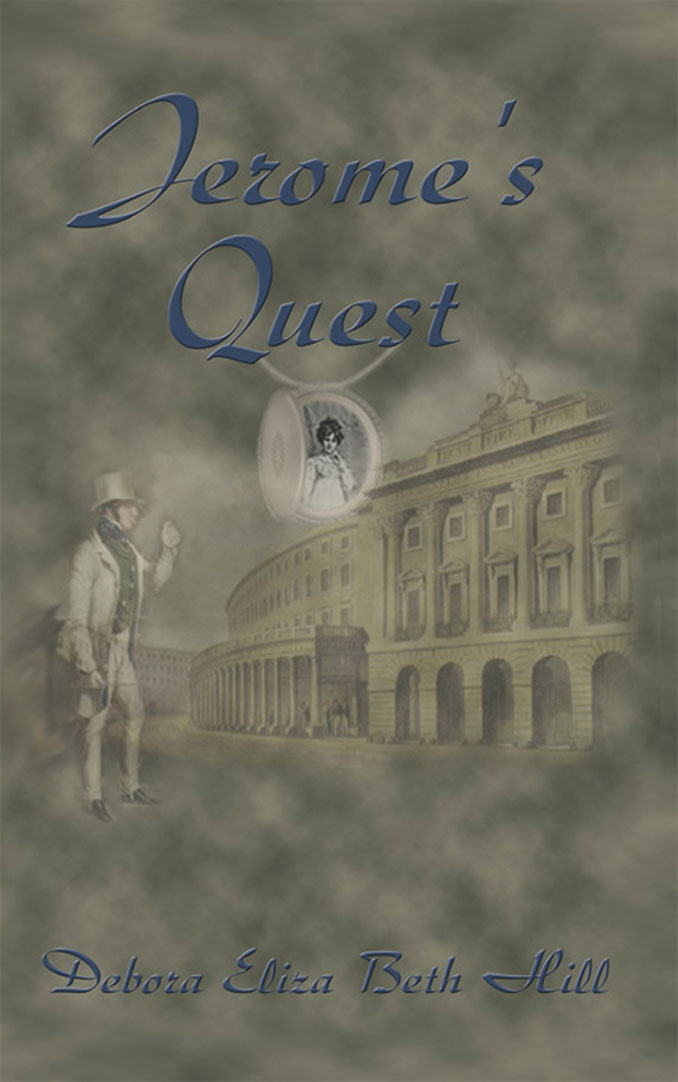 At the end of A Ghost Among Us, Jerome Kennington, the ghost who inhabited the three townhouses in Hampstead, was given one year to locate the soul of his long lost love, Alicia. Murdered on his wedding night, Jerome had spent nearly two hundred years in the townhouse before anyone was able to see or hear him. His pledge to find his murderer and avenge his own death went unfulfilled until Dierdre Hall, Charlotte Lewis and Natalie Ladd moved into the house. A television interviewer, fashion photographer and painter, the three women were the ones who could see and hear him, and through them, anyone else who entered the townhouse they inhabited.

They and their friends helped Jerome solve his death, whereby his soul was released into the afterlife, only to return with the quest of locating Alicia. To aid him in his search Jerome has a gold locket that will glow when he has located Alicia's soul. If he can find her before the year is over, he will be reborn somewhere in her vicinity and they will have another chance at love. If he doesn't locate her, he will be assigned a random location for rebirth, and he may never find her again.

Jerome's Quest is the story of the search for Alicia's soul, and the ensuing problems and complications that search causes. It begins with the honeymoon of Charlotte Lewis and Paul Harkness, once a research biologist and now director of The Animal Liberation Front. Jerome accompanies Charlotte and Paul to Sweden, where their honeymoon begins in Stockholm. But when Charlotte and Jerome are in a subway station, the locket begins to glow, and when they go to rescue an American tourist from some men who are attacking her, Jerome is attacked himself by a strange being encased in light and wielding a sword. The shadow-man drags Jerome into the light with him, and they disappear.

Charlotte takes the American girl back to her hotel and telephones Robin Herald in London. Robin Herald, lead singer of the rock band Experimental Monkeys and Dierdre's live-in lover, is also the direct descendant of Jerome and Alicia Kennington, since their first and only child was conceived six weeks before their wedding at a garden party in Richmond.

Robin flies to Stockholm to assist Charlotte and Paul in their attempts to get Jerome back from where he has been taken. Before they are able to do this, however, Robin gets drunk the first night of his arrival and awakens to discover the American girl in his bed. Unfortunately, Dierdre has followed Robin to Stockholm, and she discovers her there, as well.

They are able to pull Jerome back into the real world, though he can't remember much about where he was except a lot of fog and a landscape that never seemed to vary.

Dierdre returns home to London after telling Robin to find somewhere else to live. He also returns and gets a room in a hotel, where he plans to stay until he starts his world tour in a few weeks. Jerome is also scheduled to accompany him on the tour, and continue the search for Alicia. Robin is a little worried about Jerome being pulled back into the shadow world, but none of them can think what to do in order to prevent it.

Charlotte and Paul continue on to the rest of Scandinavia for their honeymoon.

Shortly before the tour begins, Robin and Dierdre are reconciled. But the same night, as they are asleep, the shadow figure encased in light attacks Robin in Dierdre's bedroom, and the last thing she sees is Robin being pulled into the light the same way Jerome was.

Jerome has no idea how to retrieve Robin, or even where he has been taken. But Robin emerges in 'Limbo', a limbo world very different from that of Christian myth. Limbo is a place where souls who are waiting to be re-born but cannot re- incarnate for some reason go to wait until their roster is cleared. Robin has been pulled into Limbo by Charles Brent, Jerome's murderer in Regency England. Brent also has one year to locate the soul of Alicia, but he is hampered by the fact that he cannot exit Limbo. He mistook Robin for Jerome, and pulled him into Limbo thinking to foil his quest. He also doesn't know how to return Robin to the real world, and takes him into Limbo City to consult with some experts there.

Jerome is pressed into impersonating Robin on his world tour. This starts with a sold-out concert at Wembley Stadium, at which Jerome performs creditably and only attracts a little skepticism regarding his identity -- his band-members wonder if he has been taking elocution lessons. After the concert Jerome and Dierdre attempt to sneak out the back of the auditorium when Jerome's locket begins to glow again. This leads them to rescue a teenaged runaway (male) who is being beaten by a pimp.

The boy, Dennis, enlists their help in finding a girl who has also been trapped by the pimp, and is walking the streets in his employ. When they find Rita, they acquire a whole group of runaways. Dierdre has the idea to turn the remaining two basements of the townhouses (the ones not occupied by The Animal Liberation Front offices) into a shelter for the runaways. This causes a lot of problems, some of them the obvious ones, and some they never would have anticipated.

In Limbo, Robin travels to the haven of the animals with Charles Brent tagging behind. He is assisted by a number of the animals themselves, who finally lead him to where Alicia shows him the way into the real world. Unfortunately, his appearance, nude, occurs onstage in Vienna while Jerome is impersonating him. They barely get out of the city without being arrested, and from that point on they tell everyone they are cousins. Jerome continues on the tour and appears every night for one number with Robin, spending the rest of the time looking for Alicia's soul.

After his return, Robin has trouble becoming oriented to the real world again, and begins drinking more heavily. He doesn't like having the runaways in the house during his break in the tour, and when he and Jerome are in Rome, the locket again leads them to someone in trouble; this time a young Italian prostitute attempting to outrun her pimps. They send her back to London to work for Didi and watch the runaways, but she seduces Dennis and causes Rita to run away again.

Jerome discovers his powers extend to teleportation, and he thinks himself back to London in order to help Dennis and the runaways find Rita, who has again been captured by Jack, the pimp.

After the tour ends, the whole group accompanies Natalie and Vladimir to Russia, where they are wed. In the wedding party is a friend of Natalie's, an artist named Deborah.

Deborah falls in love with Jerome and has a brief affair with him (necessarily brief, since he has only a few weeks left of his year). Jerome and Deborah accompany Natalie and Vladimir on their honeymoon in Russia, and upon their return, Jerome discovers the soul of Alicia in a London underground station. She has been born to a drug-addicted mother, and when they take her home to Hampstead with them she disappears two days later, leaving Alicia to be raised by Robin and Didi.

Charlotte is by this time four months pregnant, and when Jerome realizes that she will be his mother, he is called back to the afterlife to await his rebirth.