Lost Myths Saga: The Land of the Wand 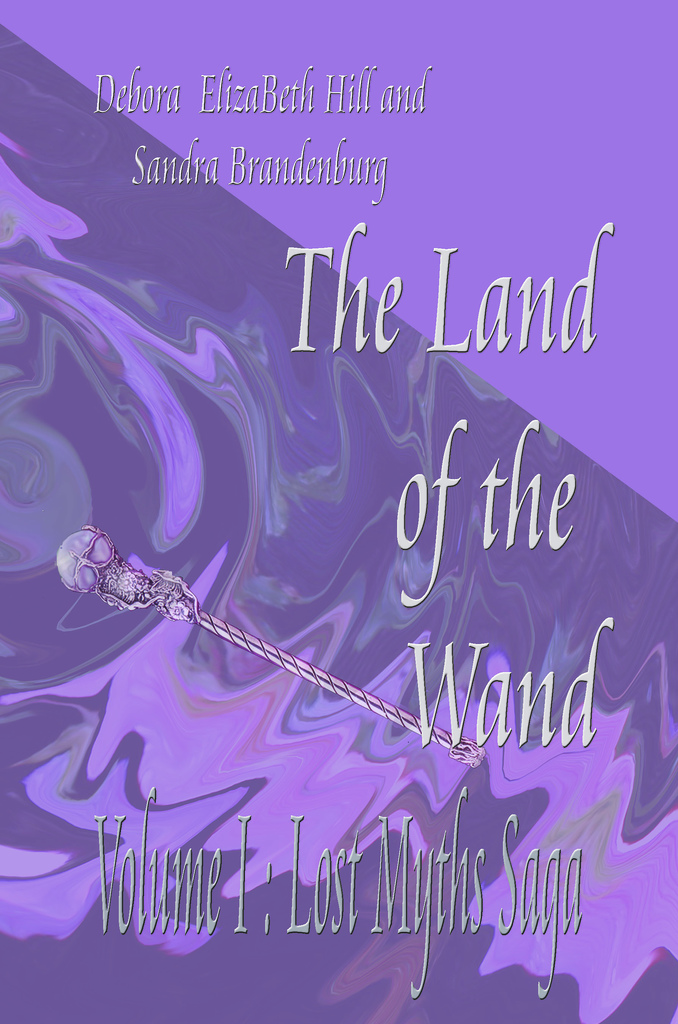 They were four people searching for a better life, all of them in Chicago one weekend in June:

Successful and famous, Evan Stone at the age of thirty-eight, was feeling empty and lost. Tall, slender and strong of frame, Evan's handsome face has not brought him personal happiness or a lasting love. As he nears middle-age, Evan's greatest fear is living the rest of his life alone.

A successful businesswoman whose spare exterior holds a remarkably romantic soul. She is tall and slender, with long, beautiful legs -- her best feature. Her strongly molded face is not flattered by wearing her hair in a straight, chin-length bob. She has read all of Evan Stone's books.

At twenty-five, Swedish singer Marshall Storme and his band Stockholm have reached international stardom and amassed a sizeable fortune -- his tall, slender muscular frame; masses of dark blond hair and beautiful face have made him the love object of hundreds of girls. Marshall is dissatisfied, however, and wants someone to realize he is more than a pretty face and powerful voice.

The only one of the four who lives in Chicago; Lilly Curtis moved to the city to escape the dull, drab existence of her parents' farm. By the time she was twenty-two, however, Lilly was still working at Burger World and dating a man whose future was almost guaranteed to be behind bars. Despite her physical appearance -- Lilly is a living `Barbie doll' -- behind the cute facade she is desperate to escape from a completely drab existence.

The instrument that will change all their lives is hanging on the wall of an expensive gift shop in The Illinois Center. The Wand is from California -- made of gold and silver, with a natural crystal embedded in the tip. Reported to have magical properties, the wand is regarded by most to be an expensive toy. But for Evan, Valaura, Marshall and Lilly it is an instrument to another dimension.

It is Evan who visits the shop and picks the wand up first. It sends him through a dimensional warp to a land where he is apparently alone. What he doesn't know is that the Land of the Wand is a place peopled with the mythological creatures of earth -- with some startling innovations and twists to the popular misconceptions of our dimension.

Valaura, who recently purchased an autographed copy of Evan's latest book, picks up the wand next. She lands in a place as unlike Evan's arrival point as is possible, and their experiences are completely different, though they eventually reach the same destination -- The City of the Wand.

The connection between Evan and Marshall is coincidental -- it is only because Marshall has purchased several paperback books, one of them by Evan Stone, and is carrying them at the time he picks up the wand. He is the next to arrive in the Land of the Wand. Lilly is last, and her connection is with Marshall -- she is his fan.

With the four of them having arrived, they band together in an attempt to survive the bewildering world to which the wand has led them. They don't know that the only way they can escape back to the real world is for each of them to sacrifice him or herself to save one of the others -- when they die in the Land of the Wand, they reappear in their home dimension.

After their arrival near a castle to which all four eventually make their way, they meet a race of people with hooves instead of feet, known as the Daemona. These people, who have developed a somewhat medieval-feudal system of living, have been told by their advisor, a witch named Augustina, that four `footed' visitors would arrive in their city soon.

Of the four, Marshall is the one Augustina has specified as the `Savior' of the Daemona, who will lead them in a holy war against their age-old, barbaric enemies, the Anjeles. But Marshall's role in the war is not precisely what Augustina envisioned. Marshall's Swedish upbringing has conditioned him to a stubborn bias in favor of peace, and he will not assist the Daemona to conquer their ancient enemy. Valaura becomes the leader of the army instead, assisted by Evan and Lilly. Marshall is the Savior of the Daemonic race; because it is he who eventually makes a peace settlement between the Daemona and the Anjeles, communicating with the Anjeles in the only way they know -- through song. The singer is assisted in this arduous task by Evan, who has taken on the role of a troubadour in the medieval hierarchy of this alien land; and by a Daemonic prince and an Anjele princess, star-crossed lovers of a most bizarre type.

The four are embroiled in a full-scale battle between the Daemona and their enemies, the Anjeles. Marshall and Evan, appointed as a diplomatic deputation to Yahoo, King of the Angeles, are tricked by the illusory powers of the winged king, and Evan is killed. Marshall kills Yahoo in retaliation and is held prisoner by his queen, Mignonette, in the dungeons of the castle. He is rescued by Lucifer, King of the Land of the Cup, and Master of Light.

During the time they spend in the Land of the Wand, each of the four discovers love and the solution to their deepest fears. Evan is the first to die, believing he is saving the life of Valaura by doing so. He reappears in the shop where the wand is sitting on the wall; and realizes it was his death in the parallel dimension that released him to return to his own world. He has no way of telling the other three the secret he has learned; no way of knowing if any of them will return or when; no way of locating them if they do.

Evan leaves the shop but returns later to buy the wand, hoping it will somehow lead him to Valaura, in the event she ever returns from the Land of the Wand. She is the next to die; when she discovers that she loves Evan and he her, she realizes the emptiness which had consumed her life. When he died, she lost the will to go on any longer, and when Lilly's life is threatened Valaura sacrifices herself, knowing Lilly and Marshall love each other.

When Valaura arrives back in the shop, the wand is gone. The clerk tells her it was purchased by Evan only a couple of hours before, but Valaura remembers him dying days earlier in the Land of the Wand. She discovers that only one hour has passed since she was first drawn through the dimensional warp. Knowing he cannot find her, Valaura sets off in search of Evan; but this is a more difficult task than she had imagined. Like many famous men, Evan has cloaked himself in a screen of employees who keep him hidden.

In the Land of the Wand, Marshall and Lilly struggle on together, trying to find a way out of the nightmare. Marshall swears that if they ever get out, they will be married. Lilly doesn't believe him, but doesn't care -- her dreams have come true just by the love they share. But Marshall's love for Lilly goes far beyond anything she has imagined, and when she dies saving him, he is determined to kill himself rather than be left in the alien world alone.

Lilly arrives back in the shop to discover, as Valaura did before her, that the wand is gone. She doesn't realize yet that Evan and Valaura returned there before her. She goes to the fast-food restaurant where she works to discover that very little time has passed, and the people she works with think she is returning from lunch.

Marshall, left alone in the Land of the Wand, is told by the Anjele princess, Ariel, that by his death he will be reunited with his friends. When he leaps from a cliff he lands in the shop, approximately an hour after Lilly. All he can remember is the name of the fast food restaurant where she works, and there are twenty Burger Worlds in Chicago. He must leave that evening to go to the next city on the band's tour, and has only a few hours to find her.

Evan wanders aimlessly downtown, and sits on the steps at Oak Street Beach. He takes the wand out of its' case, staring despondently at it. Will he ever see Valaura again? He pictures her dark blond hair as it curls softly about her face, the strength of her fiercely independent soul as mirrored in her beautiful eyes. He is determined to find her, and begins to think practically. After all, she is a well-known architect; someone must know how to contact her.

Meanwhile, the crystal on the wand has begun to shimmer with its' own life, pulsing and glowing. As Evan stares at it in wonder, Valaura comes and sits calmly beside him. She takes the wand and stares into it. Lilly's sweetness, her light youth come easily to mind. Soon she is on the steps beside them, in her faded cotton sundress. Marshall, after visiting a large number of fast-food joints in his search for Lilly, gives up and goes to do his concert at The Rosemont Horizon. He leaves the names of his friends at the box office, hoping they will think to come to the hall.

They do indeed go to the Stockholm concert and watch Marshall perform, during which Evan sees a vision of the Wand changing to an ornate metal cup, or chalice. After the concert the four travelers go to a coffee shop to discuss the heavy question of their futures and the adjustments they must make in their lives because of their experience in the other dimension.