Lost Myths Saga: The Sword and the Scabbard 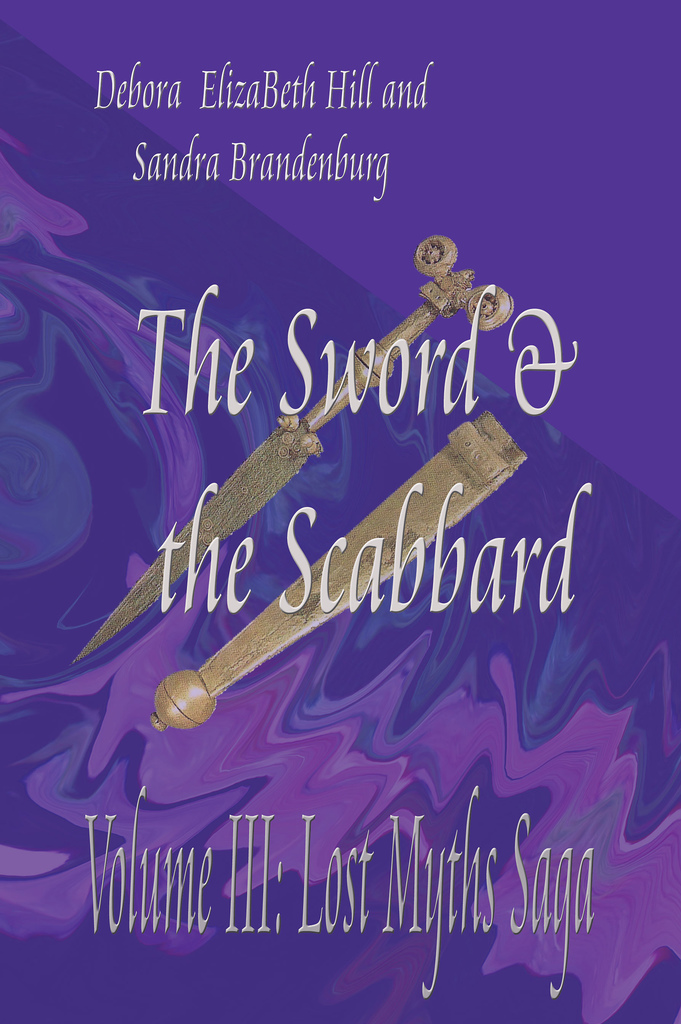 When they return from The Land of the Cup, Marshall and Lilly separate, as Marshall is unable to come to terms with his new-born sexual problems. Though he says he only wants a separation of a couple of months, Lilly decides she must make alternate plans for her life. She returns to Chicago with Evan and Valaura, and applies to attend the University of Chicago. Thus begins a feud between Evan and Marshall as to which of them will support Lilly through her college years -- Evan wins the argument by simply refusing to cash Marshall's checks, who retaliates by sending Lilly expensive gifts.

One month after their return, Evan and Valaura are married in Chicago. Marshall attends the wedding, and he and Lilly spend a night together engaging in wholly normal, if slightly drunken sexual relations. He is still reluctant, however, to reinstate their relationship, and Lilly decides she will start to date some of the men she has met at the summer session of college. Shortly after this, she discovers she is pregnant, but she doesn't tell Marshall.

Several months later, Stockholm is invited to play at an international peace festival in Cairo. Marshall invites Evan, Lilly and Valaura to meet him in Egypt and stay at the world-renowned Mena House hotel. Lilly decides she will tell Marshall

about the pregnancy once the festival is over, though she has now decided not to return to him. She is considering the possibility of an abortion.

Meanwhile, while on their honeymoon, Evan announces that he wants Valaura to stop taking birth control pills. She is stunned, since she believes that they have reached an understanding on the subject. She would love to adopt, but since she is now near age forty, does not want to risk having a child. This remains a matter of contention between them.

While waiting at Mena House, Marshall finds that the magical Cup has transformed itself into a sword and scabbard. He chooses to wear these during his performance at the festival. Many of the performers donating time to the peace festival are upset by what they see as a highly unbalanced observance of certain religious customs. In an attempt to balance the situation, Marshall unwittingly starts a fracas. Unfortunately, the peace festival has drawn some people to the city who are clearly intent on something besides peace -- religious fanatics from the surrounding, severely fundamentalist, Moslem nations.

Marshall runs one of the assailants through with the sword while Lilly is hanging onto the scabbard. They are both transported to Beelzebub's kingdom, the Land of the Sword. Valaura grabs the sword as it falls from Marshall's hand, Evan takes the scabbard and as she defends them she and Evan cross into the other dimension.

Upon their arrival, they learn that virtually no time at all has passed since they left, a fact that throws them into even more confusion over the time sequences of the two worlds. Upon their arrival Lilly blurts out that she is pregnant and Marshall does not believe, at first, that their one night reunion could be responsible. Evan and Valaura arrive in the nursery, and Evan receives his first lesson in fatherhood while dealing with a number of wailing and evil-smelling infants.

Beelzebub's desert is shared by a people called Slamites. This group is led by fanatics who believe that to die in battle and kill as many of the enemy as possible will take them to a Nirvana. the King has managed to maintain an uneasy truce with the Slamites (called Mudmen by the Daemona became their skin, hair and clothing all resemble the color of mud), but this is now overturned when Sterling and Ariel's (Prince and Princess of the Land of the Cup) son disappears one night. Abaddon rescues a maiden and the young prince of the Slamites due partially to his ability to fly. As they being to tell the Daemona about the Slamite culture and their truly strange cultural and sexual habits, it becomes very clear that the two cultures cannot co-exist. And, of course, the Slamites are going to want their prince back sooner or later.

The Slamite males derive pleasure (sexual and other) by the giving of pain. The only kind of sex they really like involves the use of young boys or girls in an unnatural fashion. They keep their women as chattel and only engage in normal sex with them at one time -- when the women reach the age of twenty, they are used sexually by twenty men chosen for the task. If the woman involved conceives a child, the ritual is not repeated. If she does not, it is repeated until she does conceive. After the birth of her child, if it is male, she is given the opportunity to kill herself by leaping off a ritual cliff in the desert. If she does not do this, the impregnation ritual is repeated once every year until she does choose to die. Most do so after the first baby is born.

For the kind of sex the Slamites really like, they must have boys, young men, or girls younger than the age of twenty (after that they cannot endanger the baby the girl could be carrying). They never use their own males for this, as this is against their religious practices -- only an infidel can be used sexually. They do use their own women until they reach the age twenty; and any males and females (regardless of age) they can capture. This is where the women captured by the 'slave traders' in The Wand are sent. The adult males in this society cover their faces with `winding cloths' and are seldom seen outside their city. When anyone goes looking for this city, it is mysteriously hard to locate.

Nothing has progressed during their absence, since no time has elapsed. Therefore, they have still the matter of the Amazzone women to deal with. Puck, Ariel's cousin, and his followers (all male) have remained in their mountaintop hide-out, Paradiso. Those Amazzone's who wish to change their lifestyles have been asked to come to Paradiso and see if the two societies can mesh.

Evan and, more particularly, Marshall have some difficulty in facing these women. In the last volume the two men had been kept as sex slaves, read that to mean sperm-providing males, by the Amazzones. Marshall is still carrying his anger at his maltreatment and resulting impotency (except, it must be noted, where Lilly is concerned), and expresses no interest in his offspring by his previous captors. Evan, who wanted a child by Valaura whether or not she was willing, is now faced with quite a number of women who are pregnant by him. He does not quite know how to react.

Lilly chooses to bear her child. After accepting that Lilly's child is also his own, Marshall begins to work out his problems in his own way. The Amazzones and Puck's Angeles are having difficulty in the matter of sexual equality. He begins to put together another festival, more like a huge county fair. The purpose is internal peace. He, and everyone else, is hoping that both fronts in this sexual warfront will see that the other side has merit.

Valaura is assigned the unenviable task of trying to decide how to confront the Slamites. Their city never seems to be in one place for very long. This is a magical effect; the city literally relocates itself whenever threatened. It is an encapsulated society, and through psychic sightings, Valaura discovers that there are many side effects. One of these is that evil action shows on the face, hence the winding cloths used by the males. Good action has the reverse effect. This makes the most virtuous of the people also the most attractive. This is not considered an asset by the females, and greatly contributes to their desire to suicide.

Because she is chosen as the one who can `reach out' to the city via a scrying pool, Valaura is forced to witness the vicious consequences of Slamite society. As Evan watches the effect this has on her, he comes around to the realization that he cannot force any woman to do what he desires. Childbearing, indeed, all sexual relations, must be entered into willingly. Lilly has been becoming increasingly distraught as time goes on. She gives birth to twins and fears that she will be separated from one or both of her children when she returns to her home dimension. During the festival, she wishes that she had never met Marshall, and he disappears. Valaura realizes that the city is near and the festival culminates in war. The Daemona attack the city and liberate the females and children. Many of the men and some of the boys choose not to stay, and escape.

Evan watches as Valaura engages in bloody battle and is repelled by the violent side of her nature. When he wishes that he had never loved her she disappears. Lucifer, who is quite frond of Valaura, is so enraged by this that he wishes Evan had never come to his world. Evan also disappears.

The war is over and the Daemona are once again seeking a solution to the many unsolved relics of conflict. Lilly is left alone in their dimension. Everyone who witnessed what happened to Valaura and Evan realizes the key to her return. Her Daemona friends do try to help, but the words must be said by someone who means them. In her sleep, Lilly wishes she had never seen the Daemona. She is returned, but is holding only one of her twin daughters at that moment.

Back in their home dimension, the four travellers are faced with an unruly scene at the peace festival, and wind up escaping the country by some very risky methods. Once safe they are still at a loss. How are they to regain the twin who was left behind?