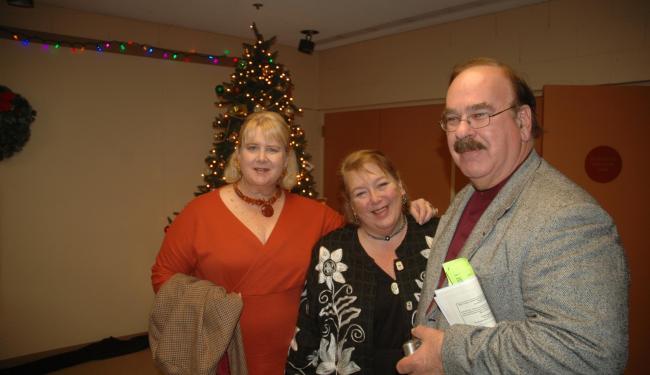 So it began, as most things do, many years ago (but not far away) in Northern California.  Sandra Brandenburg and I were lifelong friends before we became collaborators, and then business partners. We have written, together and separately, novels, screenplays, articles, interviews, poems and short stories and published some of each.  More about that later.  Lost Myths Ink became an LLC in 2004. The name comes from our fantasy series, of which the first two volumes have been published (twice!) with different covers, and now the whole series will be published with covers designed by a visionary artist of some renown. When we were in college, I introduced Sandra (nee) Barnes to Thomas Brandenburg; they were married for half their lives, and have been my two best friends. I am the CEO of Lost Myths Ink; Sandra was the COO.  In 2012, Sandra died after a long battle with health issues, and went on to the Summerland ahead of us. Sandra will always remain in our hearts, and Tommy has become the COO of Lost Myths Ink.

In 2012, we decided to form our own multimedia fund. This has taken far longer than anticipated, and been through so many twists and turns that it took over our lives. That year was also the last year we published a book, and while I am certainly hoping to return to publishing novels one day,  enormous efforts always take years to accomplish, and are usually the equivalent of a Shih Tzu birthing an elephant. And so it has been with us.  The ongoing saga of Lost Myths Ink will be showcased on this site in installments that started out as a book -- because once it reached 800 pages and I had years to go before I finished it, I decided it was just too long!

This adventure is now approaching lift-off. In these pages, you may journey with us, through published and unpublished works, photographs, reviews, and interviews. Here are our lives and the life of Lost Myths Ink LLC.  At least for now ...

In June of 2015 I joined Nikki Kirby on the development team for The Wonderful World of Oz, a proposed reality show about the ongoing adventures of Oberon Zell Ravenheart and his inner circle.  The development took a year, and the producers filmed the network presentation reel in early August of 2016.  We hope to begin production on OZ in 2017, but our Executive Producer, Eric Streit, jumped ship early in the year, and it is now up to  me, Tommy and our fellow development team member Kurt Niece to take the project forward.

So 2015 was a strange year...we lost three-quarters of a million dollars due to Ursula Strelitz and a bad mistake on the part of a former business partner.  And 2016 has been an even stranger year -- for Tom and I, the year without a home and more loss.  During the four months from the end of July through the beginning of November, I had a severe infection in my jaw and had to take Super Penicillin for 10 days, I was attacked in Reno and spent a week in the hospital there; then a week at Marin General being evaluated by a PTSD specialist.  On September 26th I was in a serious freeway accident and spent 6.5 weeks in Memorial Hospital in Santa Rosa.  I had surgery on my shattered left arm and it will take about six months for me to recover complete use.

When I was released, our business had crashed and burned.  We have had restart again, and in October of 2017 lost everything, as did so many others.  In 2018 we became involved in the sale and redemption of historical assets, an enormous joint venture between the U.S. and Chinese governments.  Lucrative enough that we will finally be ready at the beginning of January, 2020 to launch the LMI multi-media fund.  It has been a grueling, surrealistic voyage, one I doubted at times we would survive.  But here we are...