A Ghost Among Us 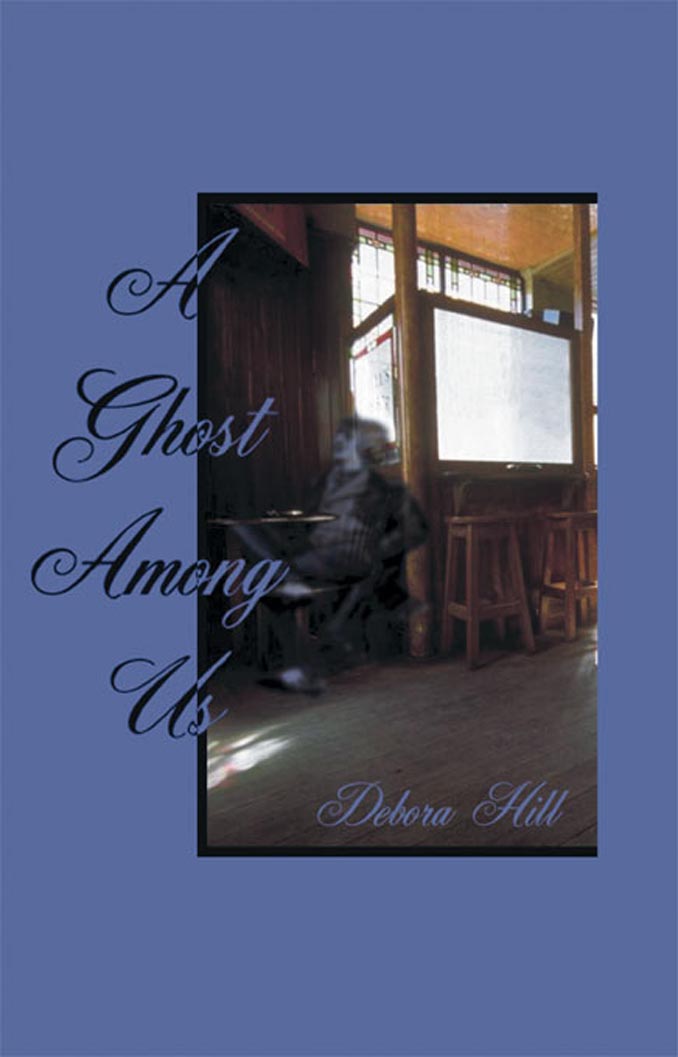 Charlotte Lewis is a young fashion photographer, whose real interest lies in photographing the street people of London. She has been living in London for approximately one year when Dierdre Hall comes to live and work there. Dierdre is the hostess of a cable television show entitled Below Manhattan; she has accepted a job for the notorious channel four; doing a British version of her show, entitled Below London. When the action opens, Charlotte is looking for a house for them to share with their friend Natalie Ladd. She finds a large townhouse in Hampstead, fronting the heath. The townhouse is part of three houses that were converted from an old manor house.

Dierdre arrives with Natalie Ladd, a painter from California who will be showing her paintings in several galleries in London and is hoping to build up a clientele there. She is the victim of a vicious divorce, and is somewhat disillusioned with men because her ex-husband, an author, attempted to keep all the royalties from his first novel even though Natalie had supported him through the writing of it. In this she is seconded by Dierdre, who divorced her own husband because he wanted her to support him. Only Charlotte and Natalie know that Dierdre is very wealthy, part of one of the richest families in the states. When the two women arrive in London Charlotte is involved with Paul Harkness, a Norwegian research biologist with The University of London.

Unknown to the three women, the house they rent is already occupied; by the ghost of Sir Jerome Kennington, the fifth Earl of Arden, who was murdered on his wedding night in the original Arden Manor. The house they are now occupying is one of three built on the site of the original manor house, part of which burned down in 1925; and it is the one Jerome has chosen to occupy. Perpetually twenty-eight years old, Jerome is condemned to remain in the house the house until he can discover who murdered him and kidnapped his bride, Alicia. He has been waiting for over 150 years for someone to move into the house who can see and hear him.

It is to Natalie that Jerome first appears, fleetingly; but to Dierdre he first speaks. Dierdre and Natalie have become interested in the history of the house, and gone to the library to research the original Arden Manor. They have discovered the death of Sir Jerome, and the kidnapping of Lady Alicia.

Natalie meets a Russian filmmaker who works for the BBC, Vladimir Rochovsky; when she is at The Camden Arts Centre arranging for her first showing. She brings him to the house in Hampstead and introduces him to Dierdre, Paul and Charlotte. They discuss the history of the house, and the story of Jerome and Alicia; the parts that Dierdre and Natalie have discovered.

It is several days later, while Dierdre is researching her first television show in London, that Jerome first appears to her. He explains his situation, and enlists her help in finding his murderers.

She tells him what she knows; Charlotte arrives home, she can also see Jerome and talk to him. He begins to tell them his story, how he met Alicia in London during the season of 1811. She was expected to marry her cousin, Charles Brent -- Alicia's father had gambled away his entire fortune and left her nothing, so it was expected she would never receive any offers of marriage, apart from Brent's.

Dierdre tells Jerome that Charles Brent is the man Alicia married after Jerome's death. Jerome is amazed, but realizes the pieces of his puzzle are starting to fit into place. He continues the story of how he and Alicia fell in love, and how Charles Brent tried to chase him away from Alicia, telling Jerome that Alicia was engaged to marry him.

Alicia never agreed to marry Brent, however, and she fell in love with Jerome and consented to be his bride.

When Dierdre does her first television show, she interviews a man named Robin Herald, who is the lead singer of a rock group called Experimental Monkeys. Herald looks almost exactly like Jerome; and the three women wonder if Herald is Jerome's descendant. They have already established that Alicia could very well have been pregnant when she was kidnapped by Charles Brent, since she and Jerome first became lovers six weeks before their wedding, and that her child was Jerome's. They show Jerome a photograph of Robin Herald, but he is not particularly impressed by his descendant, as he feels men shouldn't wear makeup.

Paul is the first of the three men to meet Jerome; it seems that anyone in contact with the women can also see him. They then introduce him to Vladimir, who attempts to film him; but the film develops blank.

When Robin Herald arrives at the house with a box of candy and flowers for Dierdre, Jerome is unable to remain in the room with him; he is inexplicably pulled away.

Robin and Dierdre become lovers. The following day, Charlotte arrives home with three kittens she and Paul have liberated from the experimental laboratory at The University of London. When she tells Dierdre that there are many more animals there, amongst them some puppies and small rabbits, the girls come up with a plan to raid the lab and liberate the animals. That evening, the group (minus Robin) make their plans; Paul has the key to the laboratory, and Vladimir plans to film the lab animals before they take them away. Then Dierdre will say the video-tape was delivered anonymously to her at the television station, and play it on-air. When Robin arrives to join in the lab invasion, Jerome somehow manages to overcome his urge to fade-out, and Robin meets his great -great -great -great -grandfather.

During this period, Jerome's story continues as he tells it to the group; of his love affair with Alicia (consummated six weeks before their wedding) leading up to their wedding and his death on their wedding night.

Shortly before the raid on the lab is to take place, both Vladimir and Robin split with their ladies. In Vladimir's case it is simply because he is unable to accept Jerome's explanation of the afterlife -- Vladimir discovers he is the only one of the group who is a practicing Christian, and the realization that his religion is not very accurate throws him into confusion. He returns on the day before the raid with a gift for Natalie, and they are reconciled. In the case of Robin, however, the problem goes a little deeper. He takes Dierdre to a party at The Hippodrome, where she runs into a former employee from her television show in New York. The woman mentions to Robin that Dierdre is very wealthy; this is done spitefully, since everyone knows Robin's position on wealth. When he confronts Dierdre with this knowledge she admits that she hid her wealth from him because she knew he didn't believe people should be wealthy. He leaves, and it is left to Dierdre to go to him and coax him back to her.

Several nights later, the raid takes place, with Jerome's assistance. He has discovered he can leave the house as long as he goes with one of the three women; but he cannot be seen by anyone else. He distracts the guards at the university long enough for the animals to be brought out and Vladimir to complete a 15 minute-long film of the lab itself.

Robin and two members of The Animal Liberation Front are guests on Dierdre's show the night she shows the lab film; they claim that Robin, being a high-profile politically-oriented rock star, was sent the film; and he brought it to Dierdre to run on the show.

Approximately a week later, Robin tells Dierdre his band has agreed to do a benefit for The Animal Liberation Front. Two men from the University of London visit Dierdre and attempt to question her about the video-tape and the missing animals; but she dismisses them coldly and refuses to assist them.

The women have continued their research into Jerome's life -- they discover that Charles Brent hired men to kill Jerome and kidnap Alicia; she was already pregnant with Jerome's child and after the birth of her son Brent forced her to marry him. After a year, she escaped with the baby and went to London, to her Aunt Sarah, the women who had sponsored her season. With the assistance of Sarah and her lover Robert, an Army Captain, Alicia plans to divorce Charles. They plan to confront Charles with Robert to protect them, but he is called away at the last minute and Charles manages to gain entrance to Sarah's house. When he attempts to force Alicia to come back to the country with him, she shoots him.

Jerome is freed to return to Alicia. He walks through the wall of the townhouse and joins her on the other side, but the following night they return, and Alicia shows Dierdre that she now has a little monkey from the lab; a monkey Dierdre tried to save but who died of his injuries.

Paul has quit his job at The University of London to become the new Director of The Animal Liberation Front. At a benefit by Experimental Monkeys for The Animal Liberation Front, Charlotte and Natalie are certain they see Jerome standing in the audience, but they cannot locate him when they go to look. Dierdre has purchased all three of the townhouses and given one to each of her friends, to live in as long as they want to. She and Robin have decided to live together in her house, and Paul and Charlotte have started to talk about marriage.

One year later, the three houses are being occupied by the three couples, who have cut French doors between them to connect the reception rooms for parties. Charlotte and Paul are going to be married in a couple of weeks and The Animal Liberation Front offices have been moved into the basements of the houses, remodelled for Paul and his staff.

One day, while Vladimir is in Berlin filming the tear-down of the Wall, Jerome appears to Natalie. He tells her that Alicia has been re-born, and he has only one year in which to locate her soul and make certain he is reborn somewhere near her. Once his soul goes into another body he won't be able to consciously remember her; he has to make certain they are close enough to meet. He wants the assistance of his old friends in finding her -- he has a gold locket she gave him, which will orient on her soul and tell him when he is in the right location.

That evening he tells his story to the group. They are skeptical that he will be able to locate Alicia in only one year, given the population of the planet. However, Natalie suggests Jerome join Vladimir in Berlin, and start his search there. He does so, and returns with Vladimir to London in time for Paul and Charlotte's wedding. They invite him to accompany them on their honeymoon; a tour of Scandinavia. He then plans to go along with Robin on the Experimental Monkeys tour -- the last will take six months and cover most of Europe, the United States, Canada and Australia.

The book ends with the wedding, and Jerome's search for his beloved begins in earnest.